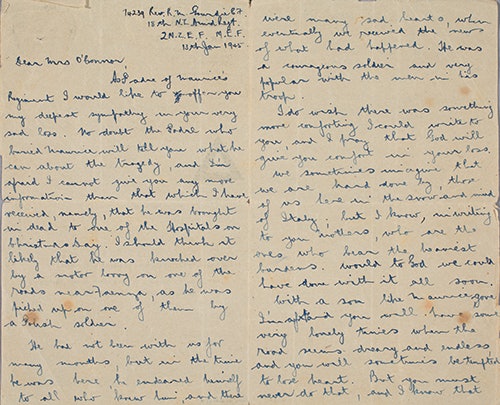 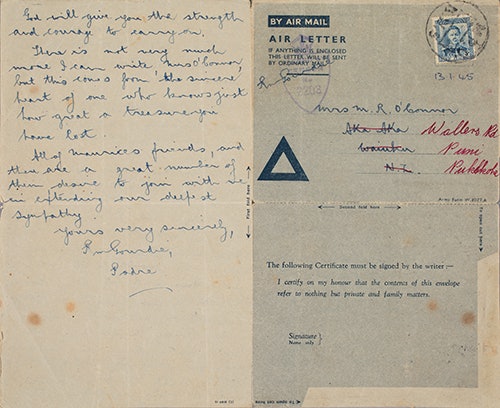 Dear Mrs O’Connor,
As Padre of Maurice’s Regiment, I would like to offer you my deepest sympathies on your very sad loss. No doubt the padre who buried Maurice will tell you what he can about the tragedy, and I’m afraid I cannot give you any more information than that which I have received, namely, that he was brought in dead to one of the Hospitals on Christmas Day. I should think it likely that he was marched over by a motor lorry on one of the roads near Faenza, as he was picked up on one of them by a Polish soldier.

He had not been with us for many months, but in the time he was here, he endeared himself to all who knew him, and there were many sad hearts, when eventually we received the news of what had happened. He was a courageous soldier and very popular with the men in this troop.

I do wish there was something more comforting I could write to you, and I pray that God will give you comfort in your loss.

We sometimes imagine that we are hard done by, those of us here in the snow and mud of Italy; but I know, in writing to you mothers, who are the ones who bear the heaviest burdens. Would to God we could have done with it all soon.

With a son like Maurice gone I’m afraid you will have some very lonely times when the road seems dreary and endless, and you will sometimes be tempted to lose heart. But you must never do that, and I know that God will give you the strength and courage to carry on.

There is not very much more I can write Mrs O’Connor but this comes from ‘the sincere’ heart of one who knows just how great a treasure you have lost.

All of Maurices friends, and there are a great number of them, desire to join with me in extending our deepest sympathy.